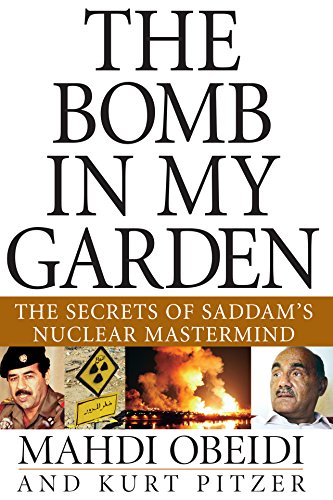 The Bomb in My Garden: The Secrets of Saddam’s Nuclear Mastermind

The Bomb in My Garden: The Secrets of Saddam’s Nuclear Mastermind – by Mahdi Obeidi and Kurt Pitzer

I was so engrossed reading this book on the train that I went 2 stations ahead of the destination. I had to get down at Metro park Train Station and I recognized that at Edison Train station.

There were 2 bombs. 1st one dropped from a B2 Bomber over the city and did not explode. The 2nd one, buried in the garden lawn.

This is the story of a nuclear scientist who after studying in the US, came back to his country and hooked by the agencies and Saddam regime to build the nuclear weapon. As a commoner, this book tells of what are the complications in achieving the nuclear grade material and how they just missed success.

How hard were the Iraqi taskmasters? What tactics did they use to get closely guarded and important parts from various western countries to achieve the objectives?

How they pushed their people to deliver?

How did the Iraqi scientist feel when they saw their closed and highly monitored lives compared to American nuclear scientists and researchers, open and free-living lives?

What did the Iraqi regime do to the people who betrayed them?

How did they avoid and concealed the Nuclear program from International Observers?

What mistake did Saddam do, else he would have been a nuclear power?

The story spans between the 1970s to 2000s and it is a spine chilling elaboration of the nuclear program of Iraq.

Finally, under what conditions did the author give in, to move to the US is stated in the book.

I am not stating these answers in this review as I don’t want to spoil the fun of reading this book.

Piyush Jain is a techy and a management professional who loves to read anything good. With varied experience, technology, finance, management, and strategy fascinate him the most, and he tries to be up the hump by reading, watching, and discussing these topics wherever, whenever.

2 thoughts on “Book Review: The Bomb in My Garden”